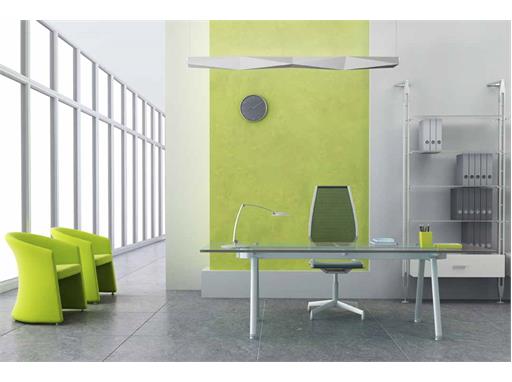 Peerless® ­— a leading designer and manufacturer of architectural luminaires and one of the innovative lighting companies under the Acuity Brands umbrella — announces the introduction of http://www.peerlesslighting.com/origami" target="_blank">Origami LED.

Inspired by modern architecture, fashion and design — and influenced by the ancient art of Japanese paper folding — Origami LED luminaires are ideal for illuminating interior spaces where a little flair is favorable. Origami LED springs to life by capturing light output and reflecting it across the luminaire's articulated, multi-faceted body. The visual effect is a kinetic interplay of shadow, light and color that varies as one views the luminaires from different angles within a space.

Powered by an advanced LED light engine, Origami LED is designed to deliver L80 performance for 50,000 hours (12-15 years) of normal use. When spaced 15 feet apart on-center in a 60' x 40' open office, Origami LED achieves a low power density of .76 watts per square foot while delivering 29 foot candles on a 2.5' high work surface. With this kind of operational efficiency, commissioning Origami LED may contribute toward a building's LEED certification by helping to reduce overall energy consumption.

Further energy savings is possible when Origami LED is specified with one or more of the following options embedded into the luminaire:

• A digital lumen management module that delivers constant lumen output, extends LED longevity and saves roughly 10% in energy use over the luminaire's lifetime.

Origami LED was also designed with a less-is-more-sustainable credo. Its thin gauge aluminum bodies use roughly 50% less metal than traditional extruded fixtures. Plus, its housings, end caps and joiners all contain recycled material.


Origami LED luminaires are IES LM-79 tested and feature a Lighting Facts® label under a program sponsored by the U.S. Department of Energy.

Origami LED is a line extension of the Origami product family, a suite of luminaires that also includes suspended and wall-mount T5/T5HO fluorescent models.