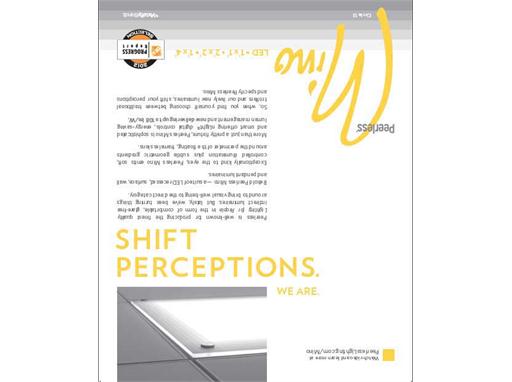 One of the most recognizable pieces of the campaign includes upside-down print advertisements.

“The upside-down format is designed to garner attention, intrigue readers and create an interactive element whereby one flips the page around to continue reading the ad,” said Peerless Marketing Communications Supervisor and campaign creator Randall Beren. “Moreover, this unique approach visually ties with the message that Peerless is now ‘turning things around’ by expanding our focus beyond indirect luminaires to include direct ambient luminaires.”

“In other words,” Beren continued, “we’re asking architects, designers and other specifiers to ‘Shift Perceptions’ and think about Peerless and our luminaires in a whole new light.”.

Another key component of the campaign is the informative product video that to date has garnered more than 1,200 views on Vimeo, YouTube and the Peerless website.

The Peerless Mino suite – which currently includes recessed, pendant and surface-mount 2’ x 2’ luminaires and that will soon be extended to include 1’ x 1’ and 1’ x 4’ models – delivers energy efficiency, quality optics, controls compatibility and application flexibility in a stylish, contemporary form. When illuminated, subtle gradient shadowing appears along the perimeter of the Peerless Mino lens surface. As the luminaire is viewed from different angles, these sophisticated abstractions shift in appearance adding drama and distinction.

Architectural SSL PIA recognitions determine and honor the most innovative LED and solid-state luminaires and fixtures on the market, while also recognizing the players behind the components that make up these light sources. For more information about  PIA, please visit www.architecturalssl.com/pia/.

For more information about Peerless Mino and to view many of the award winning campaign materials including the video, please visit www.PeerlessLighting.com/Mino. The upside-down ad can been seen again in the May 2013 issue of Architectural SSL.